The Secrets of Scientology: A Panorama Special, BBC One, Tuesday, 28 September at 2100BST

The Secrets of Scientology: A Panorama Special, BBC One, Tuesday, 28 September at 2100BST and then available in the UK on the BBC iPlayer.

John Sweeney revisits the Church of Scientology
"In 2007, while investigating the Church of Scientology for Panorama, reporter John Sweeney had a dramatic on-camera confrontation with a church spokesman named Tommy Davis. The church was accusing the reporter of bias and it attempted to stop the documentary from being broadcast - a campaign backed by Scientology A-lister John Travolta. Sweeney has returned to investigate the church again." - BBC story here


Panarama Scientology and Me 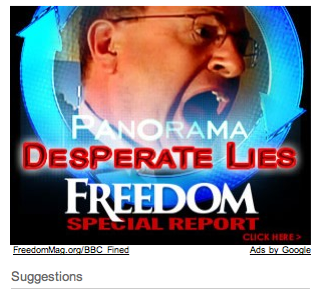 Links to Freedom "Investigative Reporting in The Public Interest"...

A Church of Scientology site