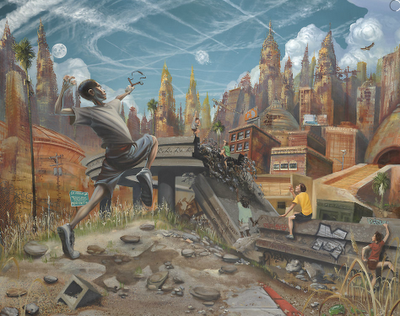 Mear One L.A. Mural King Interview on The Alex Jones Show
Anyone who has been to L.A., or knows anything about L.A. Graffiti should know about Mear, in the early 90's Mear, Hex, Slick and several others had the scene on lock!
http://mearone.com
http://mearone.tumblr.com

MEAR ONE began his career in 1986 as a graffiti artist living in Los Angeles. MEAR ONE has been labeled as "The Michelangelo of Graffiti" and "The Salvador Dali of Hip-Hop." He is considered by many to be Los Angeles' most prolific graffiti artist because of the way he revolutionized graffiti with his fine-art realism, breaking out of traditional 2D letter forms, and using perspective to develop complex characters with dynamic backgrounds in epic scale. By the early 1990's, he had established a large fan base through his notorious work on the streets, underground hip-hop album covers featuring his iconic imagery, and his involvement in pioneering early street wear clothing and graffiti culture. In 1993, MEAR was the first graffiti artists from Los Angeles to travel to Tokyo and paint graffiti in front of a live public audience. In the mid 90's, hip hop imagery and cultural icons in his work were replaced with a deeper, more introspective conversation based around a politically disillusioned reality that he felt hip-hop had ceased to address. At this point he began his transition from street graffiti to canvas paintings, and began his first body of acrylic and airbrushed paintings.
http://www.mearone.com/http://www.infowars.com/http://www.planetinfowars.com/[support the infowars spread the news]
http://www.infowarsstore.com/http://www.prisonplanet.tv/
[New Website]http://www.infowarshealth.com/
http://www.infowarsteam.com/