The View from the Other Side: J-Dilla A European Remembrance Documentary Preview & J-DILLA CHANGED MY LIFE 3/2/13 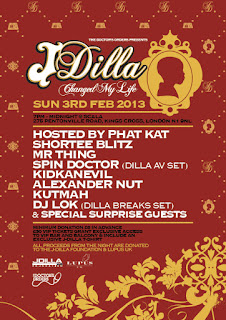 A night in tribute to the life & work of a true Hip-Hop genius.


J-Dilla was an MC, producer and musician whose work influenced artist's as diverse as Common, Immortal Technique, Kardinal Offishall, De La Soul, Erykah Badu & The Roots to name a few but a few.  Sadly in 2006 he passed away aged 32.

You Know What Love Is Pt.2 - J-Dilla Tribute Mixed By Spin Doctor HERE


Standing alone as THE Hip-Hop event of the year it is hard to better it year on year but with a refreshed line up of DJs spinning Dilla classics you know and rarities you don’t, Spin Doctor spinning a special AV set, more special guests to be confirmed & of course the t-shirt designed exclusively for the event this is sure to be another big year.
Originally recorded and pressed to sell at 2008′s ‘J-Dilla Changed My Life’ event at Cargo.
Taking in many of Dilla’s classics as well as his remixes and original breaks you can listen and download both parts of this mix here.

The View from the Other Side: J-Dilla A European Remembrance A Documentary by Shernay LaTouche
All the greats have great stories about James Dewitt Yancey aka Jay Dee aka J Dilla; now it's the turn of a continent.

A celebration of his life and times, Director Shernay LaTouche gives us: The View from the Other Side: J-Dilla A European Remembrance.

Filmed over a two and a half year period (2009 -- 2012) Shernay LaTouche travelled to four major European cities; London, Paris, Lausanne and Berlin to share the stories of dedicated J Dilla fans and investigate the legacy left behind.
The journey led to the discovery of underground cultures and communities, with each having initiated their own celebratory response to Yancey's musical legacy.

On Saturday we get the chance to see a documentary, The View From The Other Side: J-Dilla A European Remembrance that explores his legacy from a European perspective.  Shernay LaTouche’s film was three years in the making includes contributions from his family and friends as well as travelling across various parts of the continent looking at how J-Dilla’s music is celebrated and its lasting legacy.    Official Trailer

The night is hosted by DJ Shortee Blitz and also includes an after-party with DJs from Birmingham, Paris & Berlin as well as special guests.  Doors open at 7pm with Tickets for whole night are £20 (£18 Conc)  For more visit see:  https://www.facebook.com/TheViewFromTheOtherSideJDillaAEuropeanRemembrance

Email ThisBlogThis!Share to TwitterShare to FacebookShare to Pinterest
Labels: Detroit Rap, J-Dilla, Mr Thing, Shernay LaTouche, Spin Doctor, the Doctor's Order's, The View from the Other Side: J-Dilla A European Remembrance A Documentary