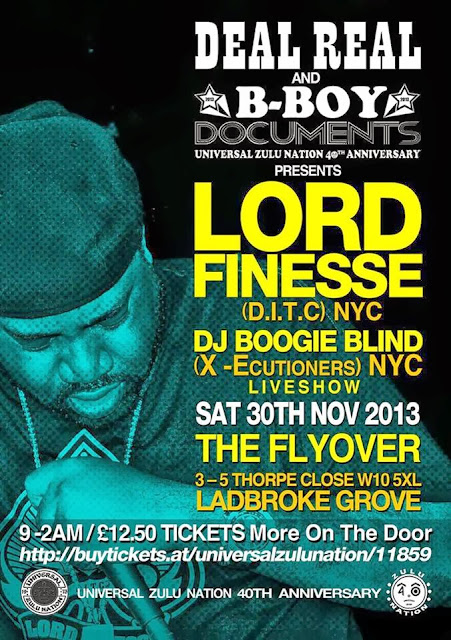 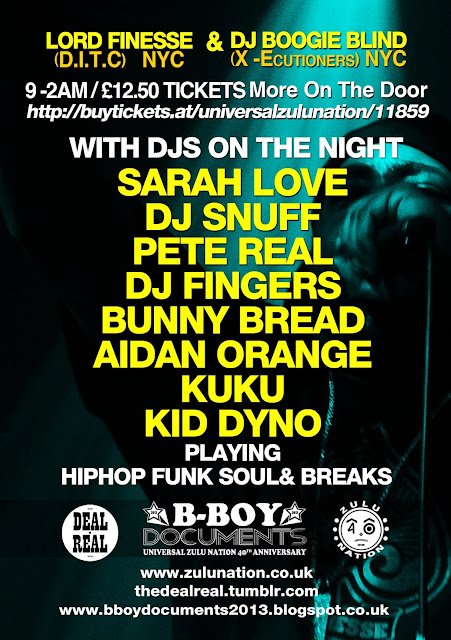 Last year LORD FINESSE rocked one of the best
LIVE HIPHOP SHOWS in the U.K
ask anyone who was there. Now here's your chance to see him if you missed him or wanna see him again......

Finesse returned as a solo artist in late 1991 with his second effort, Return of the Funky Man. The album featured guest appearances from Percee P and AG. The album's title track peaked at #13 on the Hot Rap Singles chart. 'Return of the Funky Man' also included a couple of songs that was produced by Finesse himself and this would be the start of a career as a much respected hip-hop producer. In 1994, Finesse made a production appearance on The Notorious B.I.G.'s classic debut Ready to Die, on the track 'Suicidal Thoughts'. In 1995, he produced a big portion of Big L's debut album Lifestylez Ov Da Poor & Dangerous, including the single ''M.V.P.'. He finally returned as an artist in 1996 with the now rare 12' single 'Check The Method' and then the acclaimed album The Awakening. Finesse produced the entire album himself, and enlisted a large number of guests, including O.C., KRS-One, MC Lyte, Akinyele, Showbiz and A.G., Diamond D, and Kid Capri. The underground single 'Actual Facts,' featuring Sadat X, Grand Puba and Large Professor, was included as a hidden track on the album.
Lord Finesse (with Big L) with freestyle Yo! MTV raps YouTube

Finesse hasn't released a studio album since this effort, but has continued his production work. In 1997, he produced the title track to O.C.'s acclaimed effort Jewelz. Finesse released a mixtape called Diggin' On Blue in 1999. Later in the year, he produced the track 'The Message' on Dr. Dre's seminal 2001 album. Finesse is currently working on a Funky Technician remix project, as well as a new D.I.T.C. album. Along with these projects, he and DJ Premier are working on a posthumous Big L album.
Lord Finesse - Return Of The Funky Man

Lord Finesse returned to the mic on Handsome Boy Modeling School's album 'White People' in 2004. He was featured on the song entitled 'Rock 'N' Roll (Could Never Hip-Hop Like This) pt. 2, collaborating with famous old-school DJ's as QBert, Grand Wizard Theodore and Jazzy Jay. Chester Bennington and Mike Shinoda from Linkin Park make appearances as well as Rahzel of The Roots. 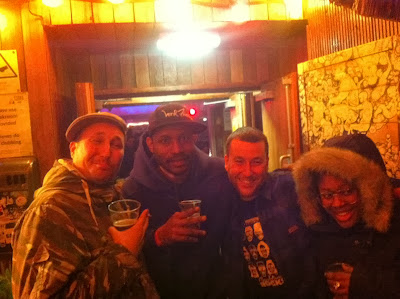 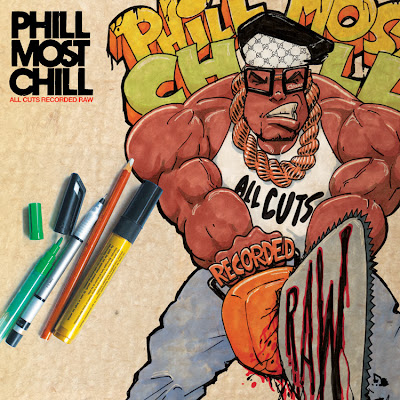 In Effect Recordings and Diggers With Gratitude are proud to finally release a full 14 track album by PHILL MOST CHILL entitled "ALL CUTS RECORDED RAW" (all tracks recorded in 1987-89 era). This will be released as a double vinyl gatefold sleeve package and CD in late June 2011.
This is the tracklisting for the Phill Most Chill 'All Cuts Recorded Raw' vinyl album: the CD is slightly different!
Multi talented Phill has previously collaborated with DWG on the highly sought after "BE INTELLIGENT EP" (DWG001) and the Paul Nice "NEVA STOP DIGGIN" 7" (DWG7004)... "ALL CUTS RECORDED RAW" is the album you have been waiting for, don't sleep!
Available from: phillmostchill.bigcartel.com


"When my album "All Cuts Recorded Raw" (unreleased songs from the late 80's) was put out on DWG Records in 2011, one of the questions I was asked was "wow, so why didn't you 'make it' back then?" This mix is pretty much the answer. The emcees you hear on this mix are some of the greatest in Hip Hop history- KRS One, Chuck D, Big Daddy Kane, Rakim, Slick Rick, Biz Markie, LL Cool J, Run DMC. They were so incredible that I didn't want to even release any of my songs unless I felt I could do as good or better than them. They showed me what a dope Hip Hop record is supposed to sound like. But my biggest inspirations were the pioneers of Hip Hop, represented on this mix by the Cold Crush Bros, and GM Flash & The Furious 5. Directly or indirectly, crews like them are the ULTIMATE inspiration and influence for every person that is a part of Hip Hop music. This mix features some of the rarest and / or most underappreciated joints by my Hip Hop heroes. Thanks to Jorun Bombay for the ill remixes!" - Phill Most Chill
No comments: 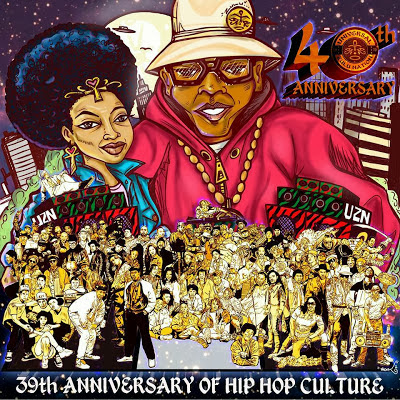 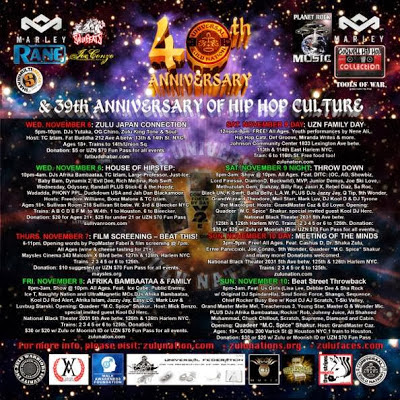 More info to be announced as it is confirmed!

Vending during the 40th Anniversary of the Universal Zulu Nation is $50 per night for Wed. Nov. 6, Fri. Nov. 8 and Sat. Nov. 9. $25 for SunDAY Nov. 9: Meeting of the Minds. Email: uzn40nov@gmail.com for more info. Paypal accepted! Vendors can bring only one assistant, only one table and 2 chairs. Must set up one hour before doors open. Space is limited, claim your space now! No vending on Thursday at Maysles or Sunday at SOBs.